A copyist for Mary Baker Eddy 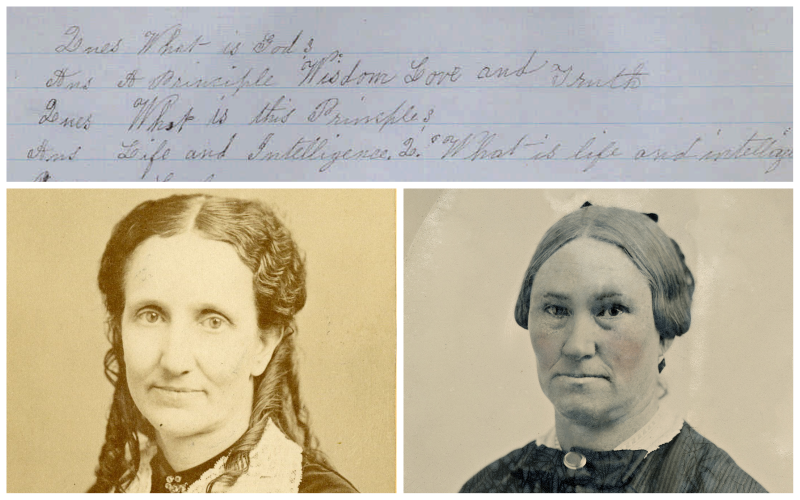 As Mary Baker Eddy began teaching Christian Science to students, she developed manuscripts. These covered topics presented in her classes and were written in the form of questions and answers. Some students were given the privilege of copying these manuscripts and keeping them for their own study.

The first of these “teaching manuscripts” was a textual explanation, or exegesis, of chapters from the Gospel of Matthew. Eddy used these to instruct her first known student, Hiram S. Crafts, in 1867.1 She then developed a few other teaching manuscripts for students, the primary example being “Questions and Answers in Moral Science.” Over the course of revision, this manuscript evolved into a document titled “The Science of Man” and was published as a pamphlet in 1876 after more editing. In time “The Science of Man” became the chapter titled “Recapitulation” in Eddy’s book Science and Health with Key to the Scriptures, undergoing further changes as Eddy revised the book over the course of its many editions.

Comparison of the many iterations of this manuscript show Eddy continually working to clarify her teachings and eliminate statements that could cause confusion or be interpreted as in some sense contrary to her mature instruction. Along these lines, she wrote this in Science and Health:

When the Science of Mind was a fresh revelation to the author, she had to impart, while teaching its grand facts, the hue of spiritual ideas from her own spiritual condition, and she had to do this orally through the meagre channel afforded by language and by her manuscript circulated among the students. As former beliefs were gradually expelled from her thought, the teaching became clearer, until the shadow of old errors was no longer cast upon divine Science.2

Some of these “errors” involved the beliefs of Phineas Parkhurst Quimby (1802–1866), a magnetic healer to whom Eddy had turned for treatment of health problems prior to a February 1866 healing of severe injuries that she came to see as marking her “discovery” of Christian Science. Other manuscripts she used for teaching also contain material that, in revised form, found its way into Science and Health.

In order to render her original manuscripts, Eddy enlisted the help of people who would transcribe clean, legible copies in their own written hand. Among them was Sally T. Wentworth. Eddy lived with the Wentworth family between September 1868 and February 1870. The Mary Baker Eddy Library has several copies of “The Science of Man” in its collection, along with some of Eddy’s other teaching manuscripts, written in Wentworth’s hand. Also included is a manuscript Eddy identified as the writings of the late Dr. Quimby.

The manuscripts that Wentworth copied give an idea of what Eddy was teaching students at that time. One of them, written on lined blue paper, is reproduced in its entirety on the Mary Baker Eddy Papers website. You can see it in its original handwritten form, as well as in a typed, annotated transcription. It consists of questions and answers, beginning with the question “What is God?” The manuscript defines the nature of God and man, and the nature of matter. For instance, Eddy’s answer to the question “What is man?” explains:

More questions and answers elaborate on the basic definitions given. Those familiar with Eddy’s teachings in Science and Health will likely realize how the answers to these questions in her published works are much clearer, and not as subject to misinterpretation or confusion. For instance, her initial answer to the question “What is matter?” says that “it is not substance…soul is substance for soul and matter are not one, then matter held as shadow is the idea of God but matter held as substance is a belief and error.”

Much of this manuscript includes instructions for healing the sick, including many ideas that would be familiar to today’s student of Christian Science, as stated more clearly in the chapter of Science and Health titled “Christian Science Practice.” Eddy refers to “liver complaint” and “consumption” (tuberculosis) to illustrate how a Christian Science healer can approach the cure of these and other diseases.

One instruction for healing given in this material, however, is a practice that Quimby had used, involving the rubbing of a patient’s head. Although Eddy never employed rubbing in her own healing practice, some of her early students believed this was important for their patients, as a means of showing them that something physical was being done to them in the course of treatment:

Rubbing the head has no virtue, only as we believe, and others believe we get nearer to them by contact, and now you would rub out a belief and this belief is located in the brain therefore as an M.D. lays a poultice where the pain is so you lay your hands where the belief is to rub it out forever; do not address your thought for a moment to their body as you mentaly argue down their belief but take yourself the soul, to destroy the error of life, sensation and substance in matter to your own belief as much as in you lies, so that your patient may be conscious of the effect of soul on him – for this principle brings harmony with it and destroys the error of sense.

In time Eddy saw that rubbing a patient’s head was completely contrary to Christian Science and could have no good effect. She then eliminated it from future iterations of these manuscripts and asked students to erase references to it in copies they already possessed.

In this manuscript Eddy also gave considerable space to instruction on how successful healers must live and act in their personal lives:

Now then to advance most rapidly, you will cut off every offending thought, or motive that is not truth, you will not love money beyond the appreciation of it as a means of usefulness, you will not lie or deceive, you will be Just and Merciful, and if you hold any belief that places pleasure in sense, you will be rid of this or how can you destroy it in others? for instance never let a student of moral science think to succeed by aught but honesty never go to patient that suffers from error with the very error you would destroy, never with a cigar or tobacco in your mouth go to a patient that is sick from the effects of this very error of belief and as you argue it down, say there is no pleasure in it which is the truth in the case, while you literally are saying there is pleasure in it by finding it there, your error here is two-fold, first to find pleasure where it is not, and thus be holding yourself in matter when science holds you outside of it, and no sensation there, and secondly by being dishonest

Now to advance higher each day, and year of your life in healing the sick, you have to look over yourself, and labor here more than you do with your patients, you must ask yourself while attempting to heal, do I come with truth to do this or a belief only? If with truth I shall be living in science, seeing outside of sense and able to read the thoughts of man, because I shall have passed from sense to soul, in which I shall realize all happiness in doing good, Now if you learn this only of me and practice it only for policy, you will have to learn it over again and practice it only for its truth, and this weight of truth on your side will then show your scientific position at the bedside, and your presence there will often heal the sick without a word on your part or the least contact with their person

Eddy also provided an answer to the question as to how one’s healing ability can be “wonderful and immediate”:

By being like Jesus by asking yourself, am I honest am I just am I merciful am I pure and being able to respond with your demonstrations. To let what you can do for the sick answer this, and not your lips, for if you are becoming what is required of you, then are you a law to yourself and will ask, am I doing to others as I would that they should do to me, am I seeking the praise of man or the praise of God which means in science, am I asking the soul to approve or am I asking this of sense? and the answer will be found in science by which you may know.

If you are seeking money in your practice more than a growth of your own, more than to be perfectly pure and honest and just and meek and loving then are you asking of sense instead of soul for happiness, and your patients will not recover as well. They will gain at first up to you and then you are not sufficiently beyond them and near the soul to carry them away from sense by following you. A stream rises no higher than its fount. If you are vain, selfish or avaricious or deceiving or unjust when you are practicing healing the sick remember you are holding on to an error as strongly as your patient. and the only difference is his is an error of pain in sense, and yours is an error of pleasure in sense, or matter. … If you feel a growing pride know that this is error and not truth if you are petulant, and irritable, watch, … if you are loving tobacco or associates in folly, … if you are loving ardent spirits, if you take medicine, if you take pleasure in any way in sense, then are you looking the wrong way. and if you look long you will certainly go there in belief- and cannot draw your patient out of error while you are being drawn into it.

It was likely a tall order—as well as an honor—for early students of Mary Baker Eddy to successfully copy these teaching manuscripts. They remain valuable to readers today, not only in showing how Eddy’s teachings increased in clarity over time but also in revealing practical guidance for the practice of effective Christian Science healing. These manuscripts are now readily available on the website of the Mary Baker Eddy Papers project for everyone to peruse.