In the 150 years since Mary Baker Eddy’s discovery of Christian Science, many people have come forward with stories of how it has impacted their lives. As part of our exhibit, Fervent Hearts, Willing Hands, The Mary Baker Eddy Library will be sharing some of these stories through our article series “Voices of a Global Movement.” In the early hours of April 18, 1906, a massive earthquake struck the city of San Francisco, California. Along with subsequent fires, it resulted in widespread death and destruction, with about half of the city’s population of 400,000 rendered homeless.1 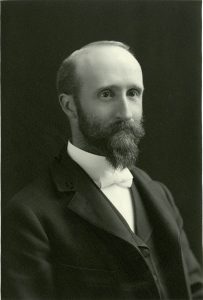 The San Francisco Christian Scientists formed a relief committee to accept donations and provide support for their members; Gale served as chairman.3 This committee established a headquarters at the home of Sue Ella Bradshaw, a pioneer of Christian Science in California. He said that, while public church services could not yet resume, “wherever Christian Scientists were stopping a service was held …. This is a beautiful illustration of the practical utility of our form of service, which can be used under all conditions.”4 Bradshaw supplied her home for women and children, while tents were erected outside as a shelter for the men.5Gale concluded in his letter to Farlow, “This is a time to realize that divine Love is meeting every need and work on.”6

As news of the disaster in San Francisco spread, Christian Scientists around the country continued to search for ways they could be of service. While it was not customary for Christian Science churches to take up funds in such situations, Mary Baker Eddy felt that in this instance a specific collection should be organized for the earthquake victims.7 On April 27 Farlow informed Gale that Christian Scientists in the Boston area had contributed about $5,000 toward the relief fund. Eddy herself donated an additional $1,000.8 The Christian Scientists of San Francisco had been forced to scatter after the earthquake, with some staying temporarily in less-damaged communities such as Oakland, Berkeley, and Alameda. When services resumed they were open-air, held on the lot that had been purchased prior to the earthquake for the construction of a new church. Newspaper advertisements and posted notices informed members and invited public attendance.9 A temporary structure was soon in place and holding regular services.10 As one attendee, Mary J. Hammersley, later recalled:

After the turmoil had subsided some faithful Christian Scientists erected a crude structure of wood, where the first Wednesday evening testimony meeting after the disaster was held by candlelight. Never was a meeting so illumined. Gratitude was so great for the many wonderful deliverances from danger and disaster that all were deeply aware that Church is indeed “the structure of Truth and Love,” as our beloved Leader defines it …11