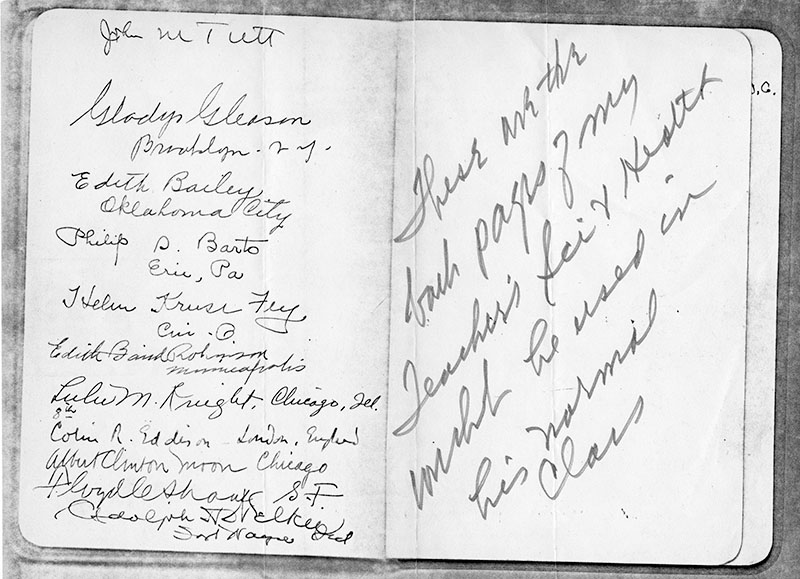 Knight’s signature appears along with those of some other members of the 1943 Normal class in the Board of Education, on the flyleaf of their teacher John M. Tutt’s copy of Science and Health with Key to the Scriptures by Mary Baker Eddy. Signatures of other students are on the following pages (not pictured).

Lulu M. Knight (c.1885-1968) was the first African American to serve as a teacher of Christian Science.

She was born Lula M. Johnson, to Jackson and Laura Johnson, and grew up in Nebraska. By the time she was in her mid-20s, she had married, had attended college for three years, and was living in Chicago.

She had also found Christian Science. Joining The Mother Church in 1912, she listed her former religious affiliation as Methodist on her membership application, which was countersigned by her Christian Science teacher, Ella Peck Sweet, C.S.D., of Denver, Colorado. Sweet was a student of Mary Baker Eddy and had briefly served in her household at Pleasant View in Concord, New Hampshire.

After Johnson was later widowed, she worked as an insurance underwriter and owned her own home, which she shared for a time with her older brother, William N. Johnson—a World War I veteran and an attorney. She remarried in 1931 to Arthur B. Knight, who later owned his own insurance and real estate business. Mrs. Knight had been listed in the The Christian Science Journal as a practitioner the previous year. (Later she amended that listing, changing her first name from Lula to Lulu.)

For 13 years Knight conducted her practice of Christian healing from her home on the South Side of Chicago. In 1943 she became a member of the Normal class in the Christian Science Board of Education, taught by John M. Tutt, and received the degree of C.S.B., allowing her to teach an annual class on Christian Science. She then opened an office in the Kimball Building in Chicago’s downtown Loop. Knight was a member of Eighth Church of Christ, Scientist, Chicago.

In 1950 Ebony magazine’s fifth-anniversary issue profiled Christian Science among African Americans. It noted that “the faith has one Negro teacher, Mrs. Lula B. [sic] Knight, wife of a Chicago realtor who has been a recognized teacher of the doctrines of Christian Science since 1943”1.

The attitude of the church toward the race question is idealistically fair, but neither its board of directors (the governing body) nor its manual define any overall policy regarding a color line. Equality is an ideal toward which it is pressing “as fast as humanly possible.”

In the South the church complies with existing patterns and state laws which prevent race mingling but in Washington, D.C., Negroes and whites attend the same churches. In Birmingham, Alabama, Negro and white members of the church used to meet together but they now hold separate gatherings due to intensified agitation for racial segregation by city officials. The two groups would like to meet together but the “law” forces them to observe Jim Crow. In Boston no record of racial background is kept on the official list of world-wide membership of The Mother Church.2

Knight was on the platform as a participant in the program at the 1961 Annual Meeting of The Mother Church. She read incidents of Christian Science healing submitted from around the world to the 7,000 attendees. The accounts she shared included healings “of lockjaw and a physical breakdown; an exophthalmic goiter; cyanosis, or a blue baby; asthma; an open wound in the leg; abdominal, back, and leg trouble; a tumor; tuberculosis; and use of alcoholic beverages.”3